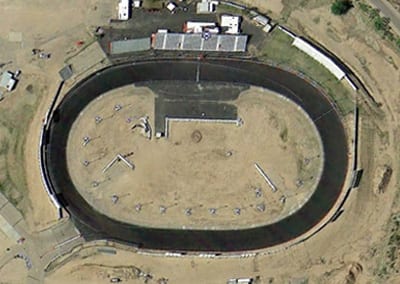 Choose your Tucson Speedway Driving Experience or Ride Along Experience to begin booking. If you’re giving as a gift or are unsure about a date, you can purchase a gift voucher and you or the recipient will have 90 days to return to the website or call 855-227-8789 and book a date.

Tucson Speedway is a 3/8-mile paved oval racetrack located at the Pima County Fairgrounds, off Interstate 10 just south of Tucson, Arizona. It is one of only three paved ovals in the state of Arizona (the others are ISM Raceway and Havasu 95 Speedway).

The track was built in 1968, originally as a clay oval and called Raven Speedway. Current NASCAR CEO Brian France took over track operations in 1990. The International Speedway Corporation (ISC) paved the racing surface and renamed the track in 1992. ISC sold the track to Deery Sports West, Inc. ten years later.

In 2005 the track was sold to Dan and Joyce Ruth, who made many track improvements. Three years later, Ruth sold the track to Mark Ebert, who made it an ASA Member track. The track was closed in 2010. In 2012, Tucson businessman John Lashley bought the lease on the track and spent six months renovating the facility, which re-opened in 2013 as Tucson Speedway. In 2014 Tucson Speedway joined NASCAR as an authorized Hometrack.